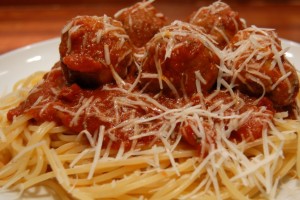 How many spaghetti nights have I savored in my lifetime? I shudder to think of it, particularly during these low-carb days when pasta is a no no. Shaking my head, I avoid the thoughts in my head and reach for the ingredients from the shelf.

Why Spaghetti Night, I wonder as I start rolling the ground beef (lean), eggs, chopped onion, and parmesan cheese into meatballs. What would happen if instead I made, say, meatloaf, or God forbid, chicken cacciatore?

I smile as I begin to sauté the meatballs in the large pan. I suppose one doesn’t sauté meatballs, but I’m not frying them for heaven’s sake. Browning, that’s the word. I’m browning the meatballs as I envision the horrified reaction of my family if I served something other than spaghetti on a Monday night.

It all began with my guy, of course. Although he comes from an Irish mother and an Italian father, he only acknowledges the Italian genes. He may be tall, blonde, and blue-eyed, but he’s Italian, by God, and Italians love their spaghetti.

So one of the first nights our kids were old enough to sit down at the dinner table with us and enjoy a “family conference”  – I think they were 2 and 4 years old – the man explained that real Italian families eat spaghetti at least once a week, so which day should we designate as Italian night?

The meatballs smell heavenly, and as the rain beats against the kitchen skylight I’m thankful that it’s Monday. I scoop the meatballs to a platter and add chopped green and red

peppers to the pan, as well as a few mushrooms.

My 4-year-old daughter, that fateful day 25+ years ago, suggested that Mondays, Wednesdays, and Fridays would be good spaghetti nights. She loved her dad and figured more would be better. My man’s eyes lit up and he agreed, “Okay!”

I put my foot down and replied, “Mondays. That’s it.” Thus, Monday Spaghetti Night was created.

The vegetables are sautéed and I add a bottle of Newman’s sauce. I could make my own, but Paul’s family does such a good job and the proceeds go toward charity. I add the meatballs and let everything simmer for two hours. When my guy comes home, he opens the front door, takes in a big whiff and exclaims, “Monday night!”

The kids are out of college and living on their own now. It’s just the two of us. But Monday nights are still, and always will be, Spaghetti Night. 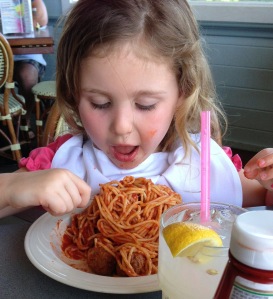 Granddaughter Sophie wants to start the tradition with HER family.