Getting lost is a hazard in my everyday life. Thus, routine can feel safe and cozy.

Normally, when I leave the house with my brain wired for, let’s say – “grocery store” – I barely think about how I turn left out of the driveway, right down the hill, and then left onto the Boulevard. Instead, I concentrate on work (shoot, did I send off that e-mail to the Board?) or family (should I buy the grandkids the wacky whale t-shirt, or will my daughter-in-law hate it?) or my guy (anniversary coming up – can I convince him we should celebrate with a weekend trip to ‘fill-in-the-blank’?).

Before the answer forms, I’m parked in front of the grocery store.

But now, we’ve just moved to a new state, a new town, and a million ways for me to get lost.

Use my cell phone GPS app, you advise?

Oh, I cannot tell you the many ways that miraculous cell-enriched voice (I call her Suzie) has saved me these last couple of weeks.

But she grows silent when I attempt a hike in the woods.

Living now in New England, where there are more wild turkeys than humans and more forests than pavement, I register for a class entitled “Autumn Walks in the Woods” that promises I’ll learn new “hidden wooded paths and trails and historical locations, while viewing scenery from up high, or strolling around local ponds.”

Perhaps this four-week wooded session is the key to navigating my way around a new “old world” location without getting lost.

The only way to register is on-line, and the only directions I receive for the first walk are as follows: “King Phillip’s Woods at 29 before the bridge.”

Having never met King Phillip nor a 29, and having crossed many bridges, I’m not sure how to meet the group. But I google the directions and optimistically follow them. Thirty minutes later, after crossing many bridges and desperately searching for some sighting of King Phillip, I spy a tiny wooden sign that bears his name, and a small dirt driveway with six parked cars. Bingo! 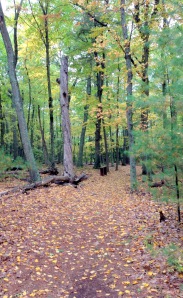 But soon after I begin my trek, the narrow tree- and shrub-lined path turns into a fork.

Robert Frost asks, “Which road will you take?”

I don’t have a clue.

Suzie the GPS voice is silent. If I become lost in these woods, I’ll never be found.

My nervous fingers discover an old tissue in my pocket.

I tear a tiny piece off and carefully lay it on a low-hanging leaf.

I follow the path until the next fork, and leave a part of my tissue behind, and the next, until I run out of tissue, and thus, courage.

I turn around and pick up my crumbs of disappointment (as well as each piece of tissue) upon not finding the group until I reach the beginning point.

And suddenly, I’m proud of my ingenuity and gutsiness.

I realize then that as long as I can leave behind some kind of crumbs, following Frost’s fork instead of sticking to a routine might be the best way to explore new worlds.

Are you a forked path-follower, or does a cozy routine help you find your way? 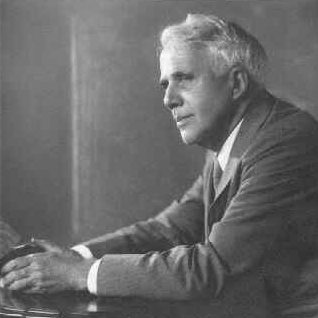 Two roads diverged in a yellow wood,
And sorry I could not travel both
And be one traveler, long I stood
And looked down one as far as I could
To where it bent in the undergrowth;
Then took the other, as just as fair,
And having perhaps the better claim
Because it was grassy and wanted wear,
Though as for that the passing there
Had worn them really about the same,
And both that morning equally lay
In leaves no step had trodden black.
Oh, I kept the first for another day!
Yet knowing how way leads on to way
I doubted if I should ever come back.
I shall be telling this with a sigh
Somewhere ages and ages hence:
Two roads diverged in a wood, and I,
I took the one less traveled by,
And that has made all the difference.

41 thoughts on “Leaving Behind (Tissue) Crumbs”