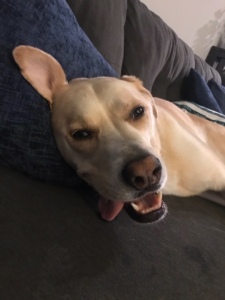 Not sensible at all, falling in love with a dog. But I’ve discovered a secret.

First, let me talk about Scooby. And his best friend, my nephew. T didn’t grow up with a dog, but he’d wanted one desperately during his childhood. So after college, when he began his first job in a new city living in a tiny rental with three other guys, T followed his sentimental dream – he rescued a dog.

Scooby came from a run-down shelter with no pedigree and was a bit of a handful at first.

What are stairs? What’s it mean to “pee” here, and not there? Why isn’t a couch a perfect napping spot?

Through it all T patiently taught and trained this goofy brown-eyed mid-sized sensation of a being.

They became inseparable. T walked Scooby on the city streets early in the morning, then raced home at lunch time for a quick outing, and after work the two of them bounded into the city park, releasing pent-up energy.

Scooby endeared himself to T’s roomies, and then to T’s new love interest. In fact, Scooby probably helped T on the romantic front. Who can’t love a guy who loves a bright-eyed, crooked-smiled dog?

In the meantime, T’s older brother, C, once disdainful of slowing down to include an animal in the mix of work and play, found himself searching a shelter in another part of the country with his new wife. In some mysterious way, C’s heart expanded, reminding me of the Grinch at the end of the story when his heart expands while singing with the Whovilles. My nephew C fell in love with a tiny, silky-haired white dog, breed indeterminate and rather challenged on the looks department.

C and his wife named the dog, who flinches at the sound of a door closing or the approach of any man but C  –  Wolfie. Of course.

A week ago, Scooby suddenly and unexpectedly passed away. He was strong and healthy with an underlying unknown condition. I cried when T texted: “Scooby will always be with me. He’s my best friend.”

And that’s when the secret hit me. Men are brought up to be unemotional, unsentimental, and unmoved by the vagaries of life. 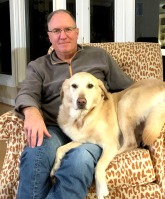 Until a dog enters their hearts.

I know that the men in my life have discovered deep wells of strong pure unabashed love for four-legged beings who give everything …. to be a best friend.

Thank you Scooby. And Wolfie, Henry, Brixton, Charlie, and Tory; thank you Oliver, Jax, Callie, April, Hubie, and Jamie, and to all the best friends in our lives.

Dog Love exemplifies the best of the human spirit.

115 thoughts on “The Scooby Secret”