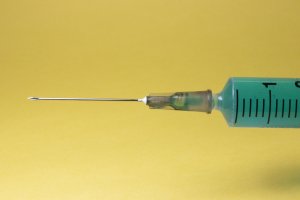 Bravery comes in all sizes and shapes. And ages.

When my CA grandson (12) flew out on his own to visit my guy and me, he received his second vaccine shot the day before. We were all a bit worried about him flying with side effects, but when we picked him up at the airport (see Oh, you’re one of THOSE | roughwighting ) he just shrugged and said “I slept for the entire 6 ½ hour flight.”

Easy peasy. Or so I thought. 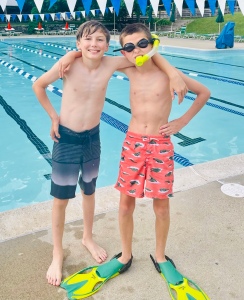 Clark turned 12 during Sky’s visit, so my daughter signed him up for his first Covid vaccine the day after.

“Would you mind taking Clark for his shot?” she asked me.

So at 10 a.m. on a sunny summer morning, I drove both boys to the CVS where Clark was registered with an appointment. Sky babbled during the 15-minute drive, “Nothing to worry about,” and “You’ll hardly feel a thing.” And, “just move your arm around afterwards so it won’t be too sore.”

Clark gulped: “Will you make funny faces or something when the nurse pokes in the needle?”

Sky gave a grin and a thumbs up.

At the vaccine desk, Clark gave his name, answered a few questions, and the pharmacist came out with a needle and a smile, leading us to a half-walled alcove. Sky jabbered the entire way, “this will be easy!”

Once Clark sat down and the pharmacist readied the needle, Clark and I looked around. “Sky, where are you?” Clark squeaked.

From the middle of the store we heard Sky shout, “I HATE needles!”

Clark and I looked down, where we could see Sky’s shoes poking underneath the alcove . We both rolled our eyes at each other. 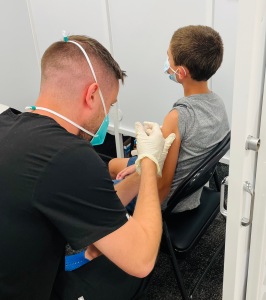 “Already?!” Clark asked as if disappointed.

135 thoughts on “Just Needling You”

This is the vibe on a cold November Sunday: tea, fire, football, and 🗞. #november #fireplace #takeiteasy #teatime #newspaper
Ice cream, grandsons, and goofy grandfathers always go hand-in-hand. Sharing is optional. 😀 #icescream #grandfather #grandson #dinnerout #ilfornino #fungrandparenting
“Gratitude for the turning of the seasons. May we attune our hearts to their enduring message of renewal.” Kristin Granger #november #changeofseasons #falltowinter #myfrontporch
Whenever I see the Golden Gate, my heart just ex-spans. #ileftmyheartinsanfrancisco #goldengatebridge #marinheadlands
Boston Beacon Hill Boo! Great decorations on this brick-lined street. #halloween #bostonhalloween #beaconhill #onmywalk
How can our spirits not be lifted as the golden leaves fall to earth? #autumn #leaves #onmywalk #fruitland #newenglandtrail