Do your teeth grit as hard as mine when people use that expression? What do they mean?

He’s just a dog, so his ‘feelings’ don’t matter, because he has none…?

He’s just a dog, so it’s fine to let him sit outside in the rain (or snow or hot sun) all day…?

He’s just a dog, so leave him at home for hours and don’t worry about him…?

I’ll lighten up for the rest of the post, but I needed to get your first visceral reaction. How do we treat our animals? Do they have “feelings” or concerns? Do they get hot and cold, bouts of hurt and spurts of joy?

Before our Henry’s arthritis got the best of him, I’d take him for walks in the woods every day. Once unleashed, he’d literally bounce for joy as he chased a squirrel or two (and habitually, the squirrels would hop up on the lowest branch and taunt the panting dog with loud cackling jeers – always made me laugh out loud).

When we returned home – me a bit sore from the long hike – Henry would get a gleam in his eye. I’d nod my head, and he’d race around our house like a speed car on a track. Around around and around. And when he stopped, his grin was as wide as a jack-o’-lantern’s.

But he was only a dog.

My daughter called me, furious, a week ago regarding their Golden, Charlie. Charlie was my daughter and her husband’s first “child.” A year later, the first “human” child arrived, and soon after two more.

But Charlie never gave up his status as first son. He wanted and needed attention, and with three little babies around, he wasn’t getting the kind of attention he demanded. So my son-in-law began to take Charlie to work, where he was loved and gently petted long and often by the staff. Perfect situation for everyone.

Until last week, when SIL had an all-day conference to attend and couldn’t bring the dog. My daughter and her little ones attended work/school all day, but once home by mid-afternoon, Charlie greeted them like long-lost pioneers who had found their way back to the settlement. Snack time ensued, along with a Charlie-walk and dinner and bath time and finally everyone was put to bed. My daughter climbed up the stairs to her bedroom, ready for a good book and an early bedtime, but she noticed the odd expression Charlie threw her way. He stood outside the bedroom door and refused to cross the threshold, which gave her the first clue. Then, she glanced over toward the bed. On her husband’s side, Charlie had left three piles of ‘poop’ neatly arranged one after the other.

As rather disgusting as that story is, I love it, because it shows how animals use their own animal-ways to send us messages. 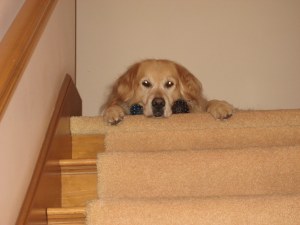 Isn’t it time to play yet?

One more story – this one on the funny side. Our first dog, Tory, loved butter. She knew it was off-limits. She knew she was not allowed to jump her front legs onto the counter and grab the stick that was softening for baking.

And barked and barked until I took the temptation away. By her middle years, we couldn’t keep anything temping out on a counter: bread, just-baked cookies, fresh vegetables and fruit (she most loved tomatoes, green beans, and apples). Anytime we heard her distinctive bark (and yes, she had a separate bark for ‘temptation!’ and one for ‘mailman!’ and a ferocious one for ‘the poodle across the street!’) we’d run from whatever room we were in and take away the offending attraction.

But she was just a dog.

She’s just a human,
but we love her.