I hate winter. I hate snow. I hate cold, I hate ice. I mutter these words as I climb out of my soul-less and hateful car, which has just broken down on Route 2 in the middle of a once-in-a-decade blizzard.

I can’t stay in the car because the engine is dead. Kaput. Lifeless and useless. I’ll freeze if I sit in the silver-metal icebox, so I trudge ahead, looking for some kind of sign of life.

And then I see it. Or her. Or whatever he/she/it/they is. A human-like form of gossamer silver and white, waving towards me. She (for I tend to think of angels as she), is either one-half a mile away, or two yards. With the snow whipping across my face it’s hard to tell.

But for some reason, I choose to believe.

I believe that an angel appears to me on this bleary dreary January night while I’m stranded on a dangerous highway, 25 minutes away from home and hearth.

I believe I was stupid to drive out to my husband’s favorite ice cream store to buy a Mud Pie for his dessert; but I also believe that what’s done out of love is reformed from stupid to stupendous.

I follow her wings and walk less on ground and more on air. I’m warm suddenly, and dry. My eyes close, but I keep on walking toward the warmth. But suddenly I thump into something solid.

Are angels solid? My eyelids are glued shut from ice that’s formed on them, but I use muscles I didn’t know I had (eyelid muscles?) and open my eyes. 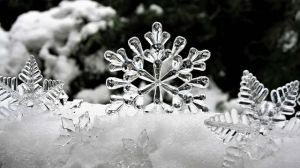 I’ve walked into no angel, but a snowman. Who makes a snowman – actually a snowwoman with curves and flowing snow-white tresses – in the middle of  a highway?

Discouraged – so much for being “saved by an angel” – I turn away until I hear a whistling sound. The wind? Yet, the air around me has grown still, as still as sleep, or death. The snowwoman begins to move, her arms turning into wings as she whispers, “follow meeeeeee.”

And I discover that . . . well, never mind. You wouldn’t believe me even if I did tell you.