Last night I went to bed early to finish a good book, leaving Henry (the dog) and the other man of the house watching TV in the family room. Suddenly I heard Henry bark. It wasn’t his “I have to go out bark,” or “Where’s my dinner bark,” but his “Help! I can’t find you, Where are you?” bark.

I laughed and called for him, and he came bouncing to me happily, tail wagging as if I’d been lost and finally found.

His reaction reminded me of how important we are to each other – “we” meaning our family members, our good friends, our “people.”

Almost two years ago Henry, my man, and I moved cross country, driving in our SUV over 8 hours a day, Henry sprawled out in the back seat happier than a clam in mud. After all, he had us, “his people,” alone in a small moving box for hours at a time. For once, he always knew where we were. He’d lift his head up from the little cave we’d built him with blankets, his water bowl, and a ball, and he’d smile so wide I realized that he’d be happy if we all lived in the car forever.

But within 6 days we arrived at Truckee, our last stop before reaching the S.F. bay area. Reservations had been made at the ‘dogs allowed’ hotel, and we were relieved to find our room on the first floor near the exit door and a good walking path.

Henry sniffed at his new spot for the night, a bit anxious that it smelled differently than the night before. My man took several trips to carry luggage and laptop and dog essentials from the car to the room, and then we unpacked the necessities, as had become our routine.

Until we heard an anxious bark outside our room from far away, and then another, and another.

“It is a dog-friendly hotel,” we both remarked to each other, smiling and looking for Henry’s perked ears and curious eyes.

But Henry was not there. He was gone! We searched the corners of the room, the bathroom, the closet.

We yanked open our hotel door.  Way down the lengthy hotel hallway, we saw a yellow blur. Our 9-year-old golden was running up and down the long corridor, barking past each door, shouting “Where are you?”

“Henry, here!” I shouted. He flew toward us like a happy puppy, like a child who’s momentarily lost a parent, like a person who has been reunited with his loved ones.

We had a sweet reunion with hugs and licks and a tail wagging so hard it hit the other side of the hallway, causing a couple of doors to open with inquisitive expressions from the rooms’ residents.

“Our dog was lost in the hallway,” we explained. 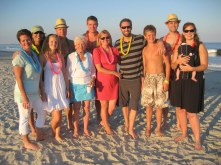 Happiness is time spent with some of my "people."

7 thoughts on “Searching for Your “People””

“Yellow is capable of charming God.” Vincent Van Gogh #bostonspring #willowtree #daffodils #onmywalk #bostonbeauty #yellow
“Some people will tell you there is a great deal of poetry and fine sentiment in a chest of tea.” Ralph Waldo Emerson #morningritual #teatime #morninglibations #tazotea #apricotvanillacrème #howistartmyday
What the devil? My seasonal specialty. Happy Easter happy spring happy renewal to all. 🐣 #deviledeggs #eastereggs #foodiesofinstagram #eggcellent
Tried to water my poor pansies but notice the icicles where the water tried to drip. That is April in New England! #aprilinnewengland #pansies #icycles #springfreeze
Working hard on publisher’s proof-my flash memoir, FLASHES OF LIFE. June pub date. 💙 #borgopublishing #flashmemoir #memoir #workingfromhome #writersofinstagram #lovetowrite
Is it weird that I made French toast with Rye bread? I may have discovered a new thing because it was delicious! #breakfastideas #frenchtoast #whatsforbreakfast #morningcook #vermontsyrup