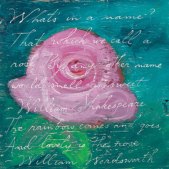 Finally my son wanted his grandmother, my mom Marcia, to meet his “friend.”

“Hey, since Nanny is visiting you, want to bring her to meet Shara and me for dinner?” was how he put it.

Most of us in the family had not yet met Shara, who had been named by us over the past months as “the girlfriend-we-are-not-allowed-to-call-his-girlfriend.”

In other words, a typical 20-something relationship.

Mom, always excited to be with her well-loved grandson, was thrilled that she, “the grandmother,” would get to meet Shara, “the secret girlfriend.”

“It’s a sign,” my mom sighed dreamily. I just shook my head.

“No,” I answered, “Sean sees a chance for a free dinner for him and his date.”

We met, tired and a bit out of sorts, at a restaurant halfway between my suburban home and Sean’s tiny hip city loft. The starless sky wore as blank an expression as the uninterested waitress, who seated the four of us at a table for six.

Within three minutes my mom demanded that we be moved to a smaller booth.

“More cozy,” she said. I’d never seen this romantic side in her before.

Sean ordered the Chianti, and Shara sat demurely quiet. I knew she was extremely intelligent, but she looked like Ali McGraw in Love Story: long slender black coat that covered tight jeans and a soft curvy cashmere

pink top, long blonde hair capped with a jaunty flat hat, the kind that only really cute, really slim women can wear. It took her 10 minutes and a glass of wine to lose the coat and hat. It took my mom 10 more minutes to loosen her up.

“So, Shannon, what do you do?” Marcia asked.

Shara looked up at Sean as if he was to answer, so he did. “She’s an investment analyst for a competitor of my company.”

Shara jumped in, explaining a bit about her position, but only Sean understood her world in high finances. We Wight women believe in words, not numbers.

Somehow the conversation turned to words, and their importance. My mom told a story about a friend calling her by the wrong name, pronouncing it Marsha instead of Marceea. “Maybe it’s spelled the same,” she said, sipping her second glass of wine, “but it’s totally different. Do I look like a Marsha? No. I’m a Marcie, or a Marcia, never a Marsha.”

We ate our pasta, our shrimp, our salads, and drank our Chianti. The conversation relaxed, the laughs got louder, the restaurant suddenly glowed in a golden light, and Marcia continued to try to draw out Sean’s girlfriend, ur, friend.

“Cher, where does your dad live? Near here?” Mom asked after hearing Shara talk affectionately about her father.

Shara looked at Sean. I think she kicked him under the table. Sean cleared his throat. “Uh, Nanny. Shara’s name is Shara. Not Shannon or Cher or Sherry. Shara.”

Mom looked stupefied. “Oh, well, how do I remember that? Shar? Shar A? I don’t know if I’ll get it right. Okay if I just remember Char? That sounds close to Cher, so I should be able to do that.”

Shara smiled sweetly at my mom. “I don’t mind at all….. Marsha.”

Silence for one sparkling second, and then the table burst into cheers, my mom’s the loudest.

A week later Sean called me on the phone for no particular reason, until I asked how his friend, Shara, was. “Well, uh, it’s okay. You can call her my girlfriend,” he responded.

I could feel his deep pink blush over the phone lines.

“What’s in a name? That which we call a rose
By any other name would smell as sweet.”