I’m a middle-aged woman who hates violent movies and shies away from angry words or, really, any kind of confrontation.

My love affair began in 1985, living in San Francisco, watching Joe Montana and the 49ers. Of course, I’d watched football before then – didn’t “get” it. What was the fuss all about?

I dated a quarterback in high school. He was cute, and my popularity increased because I was seen with the BMOC, but the football games were for hot dogs, dancing to the band, and dishing about the cheerleaders, not watching the game.

In college I went out with a guy who tried to inspire passion through round pretzels. No, really. He wanted me to understand the game of football, so he pulled out a bag of those small round pretzels (do they make those kind anymore?) and turned the dorm lobby’s old wood table into a football field.

“Here’s the quarterback,” he’d try. “Now this guy on defense will try and get away from the offensive line..” (the pretzels would be moved in position) “and hit the quarterback so he can’t throw the ball.”The guy lost me at “hit.” Any game that worked because one person had to hit another just wasn’t my cup of tea, or in those days, my mug of beer.

But Montana happened, and then Steve Young, and ‘The Catch,’ and 49er fever throughout the Bay Area. I had an ‘aha’ moment, and I began to love football (and its strategy), and to understand the necessity of hits.

Segue to this coming Sunday, with another 49er team suddenly coming from nowhere to the SUPERBOWL, with a new quarterback who astounds pundits with his finesse and running abilities and de-stressed attitude.Where are my pretzels? Where’s my 49er hat and sweatshirt and friends who are fanatic fans like me? We will dance with Michael-Jackson-moves when our team gets a field goal, prance after a touchdown, sing bird tunes with a first down, and groan like sick seals after a sack.

The moral of my post is that – hits can be good, if used properly, in football.

Roughwighting has been ’hit’ over 10,000 times! Yes, over 10,800 readers have come on over to my blog in the past 1 ½ years to see if I’m quarterbacking a blog worth hitting.

I thank all of you who read my wighting words and enjoy them, who comment when moved, who are touched in some small way from my shared revelations. 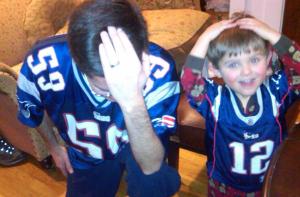 Family members prepare for the game.

32 thoughts on “Hit Me (the link between football and blogging)”

All that time on Zoom is just exhausting! #goldenretriever #zoomfatigue #granddoglove #remotework #naptime
Sometimes CAKE is the only answer that fits the question. #whatsthequestion #cake #angelfoodcake #dessert #vanillaicingwithchocolateontop
“In the depth of winter, I finally learned that there was in me an invincible summer.” Albert Camus #onmywalk #invinciblesummer #newenglandwinter #concordma #minutemannationalpark #winterblues
My writing desk. The fantasy is on the screen. The reality is out my window. #iamwriting #writersofinstagram #frommywritingdesk #snowday #fantasywriter #romancingthesnow #iwriteromance
Of COURSE we shoveled a path to the bird feeder! ❄️😚 #birdfeeder #shovelingsnow #birdlover #newenglandwinter
“Be patient where you sit in the dark. The dawn is coming.” Rumi #afterthesnowstorm #halfmoon #frommyfrontdoor #silenceofpeace