It’s a weekly (happy) chore to most New Englanders.

Californians are horrified at the thought.

When my man and I moved to Massachusetts after 16 years in sunny California, our realtor informed us that we could choose to either pay for a trash pick-up service or select to take our trash to the town’s dump, euphemistically called the “transfer station.”

“I don’t think we even have to think about that one,” I answered.

“Exactly. The transfer station is the best choice,” the realtor agreed.

“You’re new in town. The dump is where you’ll meet your neighbors, hear all the town gossip, and meet the local politicians,” she interrupted.

My guy and I glanced at each other and simultaneously exclaimed, “we’ll take the trash service.”

But our decision shocked our new New England friends.

“Why would you pay to have your trash taken away?” was a frequent question, underlined with a not-so-subtle inference that we wasted money and showed a lack of moral fortitude.

“But how do you ‘transfer’ the trash to the dump?” I’d stammer while still a Yankee newbie.

The looks of disbelief (and yes, a bit of disappointment) taught me that I was a foreigner, in a foreign land.

“You throw your trash bags – separated into garbage, cans, glass, paper – into your car, of course.”

I bit my tongue instead of following through with “what if you own a small car (which I did) and have a lot of trash?”

Because you know what the answer would be, don’t you.

You just make more than one trip. 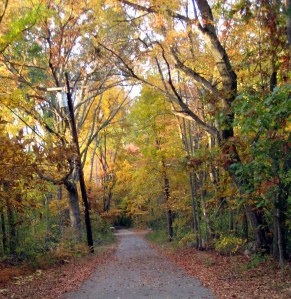 But there are two other reasons besides New England thriftiness that drives residents to the dump.

No, we won’t let you take this to the dump!

One of them is that you can bring your 25-year-old bike, the electric can opener that never worked, and your 21-year-old son’s baby blanket and “dump” them into the garage-like shack at the transfer station.

Someone will be (anonymously) forever grateful.

Now that I’m back on the left coast, I admit to a twinge of remorse when I roll out the large brown trash bin to the curb, all clean and neat and easy.

So after trash day this week, I call a lovely New England friend and ask her how she’s handling her husband’s early retirement.

“Oh, it’s fabulous!” she declares. “He’s never home – he goes to the transfer station three times a day. He finds old junk in our basement to get rid of every week.

The boys meet at the transfer station.

I laugh, knowing he also meets his buddies there, including the former mayor, the reclusive billionaire, and their stockbroker.

“What could be more perfect?” I ask.

“Welll,” she vacillates. “Not perfect. He comes home with new treasure every time, like an ancient pair of skies (‘maybe I’ll learn this year,’ he says) and a 1980s pair of sunglasses that reminds him of the kind he lost 30 years ago.”

“Oh, the dump has saved our marriage,” she agrees.

And that’s the third reason New Englanders go to the dump.