Many middle names arrive in the middle of confusion, compromise, and even confrontation.

Well, for the first 30 years of my life, you couldn’t have taken it, because I didn’t have any.

When I became sentient enough to realize that unlike my friends (Beverly Lynn Pooling, Julie Glory Wyckoff, Barbara Ann Bancroft) I had no three-word-title to deliver on the right hand side of my school papers.

When I was 6, I asked my parents what my middle name was. They did that “parent look” over my head, the look that said “don’t say anything,” and just replied, “You don’t have one.”

When I was 9 I asked my parents why I didn’t have a middle name. They did that parent look again, but this time I stomped my foot and demanded an answer.

My mom explained, “when you were born, your dad and I couldn’t agree on what your middle name should be.”

Dad added, with love in his eyes, “so we agreed to give you NO middle name.”

Boy, that made me mad. So glad the argument turned out well for them, I thought, but what about me? I explained these feelings to them, as only a 9-year-old can, something like, “BUT I WANT A MIDDLE NAME NOOOOOOWWWWW.” So they calmed me with compromise.

“Pammy,” my dad said earnestly, “when you’re old enough, you can decide your own middle name.”

Wow, that stopped my protest immediately. Really? My middle name could be anything?

My mom, seeing how much pleasure this idea gave me, said over my head and into my father’s ear, “let’s see what she wants it to be right now. Why wait?” 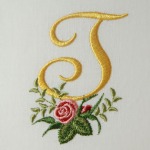 Then I came back to them and announced that my name was now Pamela Thankful Wight.

Uh oh. That parental look across my head occurred again. After much “discussion” (me crying and they pleading), we came to a compromise. When I turned 15, I could create a middle name for myself, no matter what it was, and that would be that.

Well, six years later, I approached my parents on my birthday and said, “Okay, I’m ready.”

They didn’t know what I was talking about! They had forgotten about my middle name.

I certainly had not.

I choose the perfect name. I heard it sung, over and over again, by the Beatles. The girl they sang about was beautiful and romantic and desired.

That would be me.

“My middle name,” I declared, “is Michelle.”

“You only like it because of the Beatles. Wait a few more years, then decide,” my dad said.

“I will never NOT like the name Michelle. Pamela Michelle Wight. It’s perfect!” I argued over and over, but to no avail.

I was Pamela “Nameless” Wight.

Until I met my guy who became my forever mine.

And guess one of the first things he did, after he declared undying love for me?

He gave me a middle name.

As soon as we began to co-exist (and then legally marry), he filled out our rental apps, taxes, insurance forms, school release forms for our kids, etc., etc. with his name and mine: Pamela S. Wight.

Only one slight problem.

To this day, he has still never told me what the “S” stands for.

54 thoughts on “What’s in the Middle of your Middle Name?”