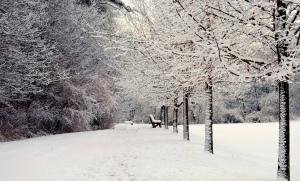 I wake my daughter at 7 a.m. and exclaim: “It’s snowing. We have to go for a walk!” I’m spending the weekend with her and her young family, who are hushed into dreams. But I can’t let her sleep and miss this fun.

A best friend would turn over in bed and fall back to sleep. But a daughter rises and brushes her teeth with her eyes closed, puts on her warmest woolens, and trudges out in the air-brushed world of a winter wonderland with her mother.

The air sparkles as the soft snow cascades onto the open land. We find the path that leads to the woods and listen to the crunch of our boots on new-fallen snow atop a hard crust from past storms. I laugh and skip through the white delight; my daughter grimaces and tells me I’m crazy. She’s not awake yet, but I know she’ll appreciate all of this soon. 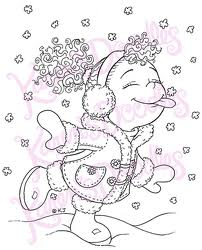 I stick out my tongue and taste the snow as if it’s candy. She shakes her head in disgust and walks on. I shut my mouth and decide to wait until her soul awakens and she thanks me for this time.

The air rushes through the pine trees that are iced like a wedding cake. The sound of the wind through the branches gives me 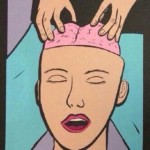 a brain massage. I am so happy I think I’ll burst into song until I remember my pledge to keep quiet. But my daughter’s head snaps up, snow sticking to her surprised face.  Muffled hoof beats get louder and louder, until the source of it is upon us.

“Whitey!” she exclaims. I stare at the two-winged horse in utter astonishment. When my daughter was young, I’d tuck her in bed with stories of a fairy wonderland, where the snow always fell like diamonds, where elves played hopscotch with snow imps, and where Whitey, the snow-white fairy horse, flew with the wind to find little girls to ride on her back.

I look upon this mirage with awe, but my daughter is not fazed. She’s always believed that Whitey exists. 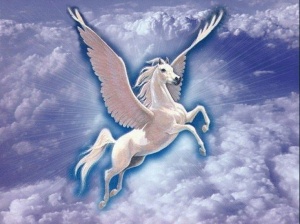 “Ladies,” Whitey says in a soft female tone as she lowers her head, encouraging us both to slip on her back. I hold on to her stiff white mane, while my daughter circles her arms around my waist.

“Imagination is based on reality,” the horse’s feminine voice whispers toward me as we rise into the white polka dot sky. “Imagination is a free ride toward joy.”

I close my eyes and smile as I hear my daughter’s voice ring out: “Yippee!”

30 thoughts on “A Wintry Flight of Fancy”