I look at him across the table, thinking, who is he? Who is this tall, intense, handsome, stiff, strange man sitting with me at La Provence, eating his asparagus quiche daintily as if it were made of flower pedals?

I’ve known him for more than 30 years – intimately – and I truly have not a clue who he is. It was so much easier, when he was my baby boy, and even when he was a burgeoning almost-teenager, still giving me hard hugs at night. He told me stories about his war games with his best friend back then, and his dreams of being an importer/exporter, even though he had no idea what that meant. He was chubby, with a wonderful chuckle and a dimple as wide as a dime.

That boy made me a lanyard every year during the summers he attended camp. So did his sister. Her lanyards were beautifully made – color coordinated, (pink/black/white one year;

red/white/blue another; green/yellow/orange a third) and I loved using hers as key chains. My son’s lanyards were a bit too short and stubby, and being color blind, he’d make them in rather odd combinations – green/red/brown, or black/brown/purple. I was smart to never ask him what colors he thought they were.

To be fair, I’d use his lanyard as a key chain one month, my daughter’s the next, changing back and forth throughout the year until the next summer’s lanyards. I considered the key chains to be symbolic of their personalities. Daughter’s was tempered, beautiful, and calm. Son’s was erratic, energetic, and hard to fathom at times.

As difficult as my son could be as a boy – full of crazy energy, asking a zillion questions an hour and rarely satisfied with the answers, testing-testing-testing us every day, he was extremely affectionate. He insisted I read a story to him before he fell asleep every night until high school.

When he was old enough to get a job, he worked at a flower shop and used all his earnings to buy me bouquets of roses, hydrangeas, and one time a 3-foot-high delicate yellow orchid. With the next job, he bought me earrings and pearl bracelets. The last job he had in high school was at a shop that roasted coffee beans.

Even though I didn’t drink coffee, he’d bring home bags of freshly roasted beans, which smelled delicious in the kitchen.

Then, suddenly, he became a college student, six foot two, slender as a reed, but as muscled as the men on the covers of romance books. He worked out five days a week, got A’s on college papers entitled “Religious Symbols on the Work of Dutch Painters,” and was the Vice President of his “Animal House” fraternity. He barely called; e-mailed infrequently.

He’d cut our umbilical cord with an easy snap of distance and age.

Snap of a finger, and the son is now a married father of three. As we sip on our wine, he looks at me as if he suddenly sees me, a mother, a wife, a woman, a person.  He smiles hesitantly, as if not sure if it’s okay, but then suddenly lets loose a wide grin that melts my heart into mush. His eyes probe into mine, deep deep lake green eyes. They’re hard to stare into, they’re so unfathomable and questioning.

I wonder, then, who is this son of mine, and as his mom, will I ever find out? 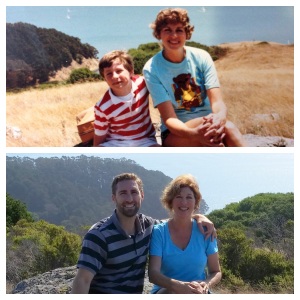 On left, from child to man; right, but always a mom.

86 thoughts on “The Son Also Rises”