I’m a writer, so I love to eavesdrop. In fact, I encourage my creative writing students to listen to conversations unobtrusively and often.

But I do wonder what listening to someone else’s discussion has to do with an eave (the edge of a roof that overhangs the side of a building) dropping. So, as a writer/researcher, I look up the origins of the word. 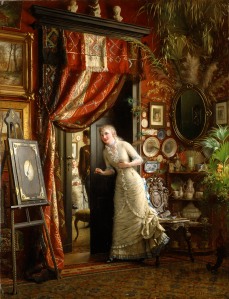 “The Proposal” by Knut Ekwall.

The term “eavesdropping” originated from Anglo-Saxon laws in the early 17th century to prevent building homes too close to the border of another neighbor’s land, in case the rain running off the roof, the yfesdrype or “eaves drip,” messed up a neighbor’s property.

Soon, a person who stood within range of the dripping eaves – so close that he or she could listen to a neighbor’s private discussion – was called an Eavesdripper, which turned to “Eavesdropper.”

The word’s meaning grew;  soon, even those who listened behind a door, or by a window, were called Eavesdroppers.

And now, we contemporary eavesdroppers just sit in a café or coffee shop and listen in to the conversations at the next table.

Which is how I hear the amazing story of a husband who impresses his wife at the airport. Fraudulently.

Please, join me here while I eavesdrop….

As I sip my iced green tea, waiting for a friend to join me at a local café early in the morning, I can’t help but hear the group of five men at the table next to me telling stories, laughing at each other and themselves.

The loudest man of the group, gray-bearded and rotund, states, “I was at the airport last night picking up my wife.”

Hmm, I wonder in my curious writer’s head. Where had she traveled? Why did he not go with her?

“A group of other people were waiting also at the international terminal, because the passengers had to go through customs first, of course,” the man continues.

Aha. The wife had flown overseas. Work related? Was she a businesswoman? A spy? Or just traveling to visit a grown child who now lives in London, or Zurich, or Berlin? (Yes, this is how a writer finds her fiction.)

“I was perturbed to see a number of men holding flowers to give their returning loved ones.”

I quickly glance over at the speaking man’s face. He doesn’t look perturbed. The group of five friends begin to chuckle. They seem to understand where this conversation is leading. I do not.

“Cripes,” the bearded husband declares. “I never thought of flowers.”

One of the man’s friends says, “You cad.”

WHAT? I would not have guessed this. The table next to me is silent except for the guffaws of the husband.

“The man gladly handed me his flowers for my money, and when my wife came out of customs 10 minutes later, she gave me a grateful smile for my thoughtfulness.”

I don’t hear the reaction of the table – my friend joins me just then. But  I’ve just gotten an idea of what the least desirable minor character in my next book will do.