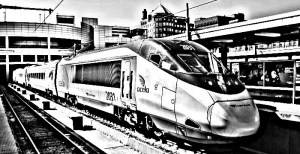 Nina stood on one foot, and then the other. The train was three minutes late. She could not afford to miss one second of the project meeting in New York.

Knowing that the regular train sometimes got stuck at some godforsaken station on the way, she purchased a ticket for the more expensive high-speed Acela, which gave her an hour fudge time.

Peering at the watch on her wrist, she figured she now only had 55 minutes of fudge time.

Nina’s mouth started to water. She skipped breakfast to get to the Boston station on time. Plus, she was on a diet. She was between men and needed to trim down. Ha, as if she dated frequently.

In reality, she hadn’t “had” a man for eight months. And the last one had been a literal affair since he was married, promising her he was leaving “Betty the Beast.” That’s what Ben called his wife – soon to be ex-wife he swore every time they met surreptitiously at the Boston Park Plaza.

Each time she entered the up-end business hotel she wished she could find someone who swept her off her feet and took her to some romantic country inn, perhaps in Italy, or if not out-of-country, then in New Hampshire at least. 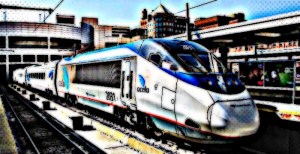 Nina heard heavy breathing in between her wishful thinking and noticed a man – a handsome man at that – racing down the concrete corridor, huffing and puffing when he reached her.

“Don’t worry,” Nina said to the man, “I don’t even see the headlights yet.”

He glanced at her strangely.

What, does he think, I’m flirting with him? Nina wondered. She mentally surveyed her 40-year-old self: conservative black suit, white blouse, medium black heels, silver watch, no rings on her fingers. Boring as hell.

In fact, that’s what Ben said to her eight months ago. “You don’t want to do anything fun.” This was after she told Ben that she wanted something better than the Boston Park Plaza.

The harried man, carrying a blue and pink flowery valise that seemed totally out of kilter with his gray-suited business attire, faced Nina.

“Me?” she asked. He really was quite good-looking. Green eyes that were pleading with her now.

The train surprised her by roaring into the station. Nina took a step back from the yellow line just as the stranger swiftly handed her his decorative carry-on.

“I’m sorry,” he mouthed just as he swiftly turned and ran off.

The train doors opened and the conductor shouted, “All Aboarrrrrd!”

Nina did just that. She climbed aboard holding her own overnight bag and the man’s pretty carrier, her purse over her shoulder.

She didn’t gasp until she sat down, settled in, and opened the bag.

WHAT’S IN THE BAG? GUESS HERE! THE WINNER GETS A COPY OF MY PAGETURNER – TWIN DESIRES.

This fast-paced thriller, set in San Francisco and the quiet CA town of Stinson Beach, follows Sandra Eastman and the two men who almost destroy her world.