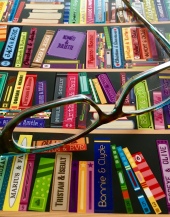 When Charlotte heard the ring of her bookstore door, she popped her head out of the masterful novel she was perusing.

From behind the book stacks she watched the intruder slink into the aisle.

Well, of course he wasn’t an intruder. Hopefully he was a paying customer. She’d had too few of them during this brutal meandering month of March. But that was part of the program. During the quiet season here on Block Island, Charlotte got used to her own company; she got used to brewing herself a carafe of hot tea and savoring the smell of jasmine and lavender.

She got used to the quiet.

But now this boisterous man had unsettled her silence. Not that he’d made much noise, but his shoes did squeak on her worn hardwood floors, and he did clear his throat a number of times.

“Can I help you?” Charlotte inquired with a slight rise to her voice as the poor man nearly jumped out of his skin.

His face reddened as he exclaimed, “Oh, I thought maybe I was alone – I didn’t see anyone, and I hoped, of course, that…”

Charlotte interrupted him. “The sign on the door says ‘Open’ and the lights are all on, so of course I’m here.” 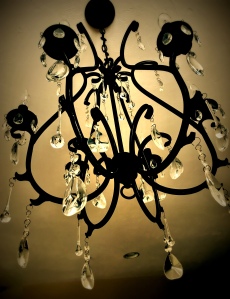 At her voice, the diffident man walked closer to Charlotte, who happened to be standing underneath the store’s antique crystal chandelier. She noticed the man peer at her over his bifocals.

Charlotte stepped out of the light.

“Charlotte?” the man asked like a child asks for a second piece of candy.

Charlotte touched her hands to her face, as if checking for sure that yes, indeed, she was Charlotte. She glanced cautiously at the mirror hung on the back wall of the shop, where in wavering layers it told of a 50-something woman wearing flannel-lined jeans and a plaid pink shirt facing a stranger with a mixture of surprise and hope, suspicion and hunger.

His gasp told her everything she needed to know.

123 thoughts on “The Bookstore Intruder”