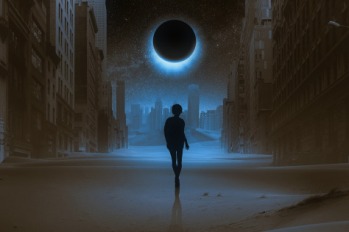 The rain falls so hard the trees appear to be weeping. I stand on the steep sidewalk waiting for the school bus, hair frizzing into tight curls but mouth curled up in a sweet grandmotherly smile.

My grandson turns seven today, and I’m determined to help him celebrate.

Of my six grandchildren, Steven is the most enigmatic; at times, full of energy and light, other times quiet and introspective. He seems to know something that no one else does.

Finally, the school bus brakes in front of me like a yellow submarine. Steven climbs down the five steps hesitantly, but when his eyes find mine, his smile radiates a bright glow.

“Grammy!” he shouts, backpack slapping behind him as he races toward my arms. We hug and then approach my new car.

“A mini-cooper,” Steven observes with a subdued tone in his voice.

“Isn’t it cute?” I crow as I crawl into the driver’s seat of the mint green toy.

As Steven snaps on his seat belt he says, “Uh huh. Mini-coopers are for old people.”

“Welllll.” Steven is one of those kids who hasn’t learned to lie, or even smudge the truth.

I ignore him and suggest, “Shall we go to the Sweet Shop and get cupcakes to celebrate your birthday?” This is a routine I’ve established with each of his brothers, who devour cupcakes as if they’re M & M’s.

“No. Ice cream,” Steven suggests. If a suggestion sounds like a wistful demand.

The car’s windshield wipers can’t keep up with the rain. My soaked sneakers slip on the accelerator as my shoulders shiver underneath my wet jacket. “Maybe it’s bit chilly for ice cream today?”

Steven stares at me through the rear view mirror. “Ice cream is for special days,” he intones. “Today is ordained to be special.”

After I park the car, we skip through deep puddles to reach the tiny ice cream shop, which, not surprisingly, is empty of patrons. We sit on a small bench and watch the rain drip down the shop’s glass door as Steven inhales his birthday cone.

“I can’t wait to be as old as you,” he muses, licking some raspberry liquid off his fingers.

“First, I’m not old yet. Second, why?” I ask, not giving up my own fiction of youth, yet wondering why he’s ready to disown his.

The first two reasons sound like a 7-year-old, but the last one doesn’t. “What’s your path?”

Steven points outside with a sticky ice-creamed finger.

I gasp. The clouds have dissipated, and in front of us we can see the city clearly, even though it’s at least 25 miles away. The moon, or perhaps I should say, ‘a moon,’ floats in front of the sun, adding an eerie glow to the remains of the day. “Eclipse?!” I whisper. None has been forecast.

“My path,” Steven states in a voice so still and sure my heart lurches. He kisses me on the cheek, throws the end of his cone in the trash, and sprints out the door, down the wet alley, toward his unknown.

I race after him. 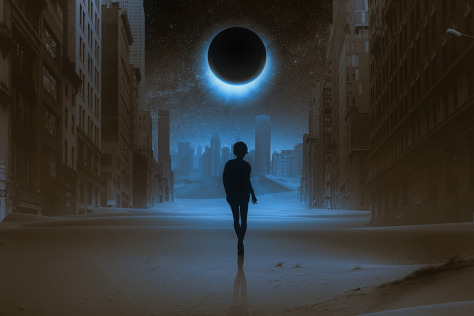 Image by Natan Vance from Pixabay.