And then I could wait no longer.

So I ignored psychic Aurora’s “suggestion” to go on as if nothing had happened. Too much was at stake. (See last week’s Fear of Dawn.)

I blamed Todd, of course. His pursuit of me had seemed so genuine until I realized that his professed love was actually “gem”uine.

The night before I had sought the “Spirit Goddess,” halfway through a romantic dinner that Todd had planned with caviar and candlelight, he slyly asked, “Eve, are you any relation to Hal the Huntsman?”

“How’d you know about Uncle Hal?” I asked, astonished and naïve.

Todd shrugged. “You both have the same last name, and you’re both wealthy.”

My brain began to flash warning signals. I never told Todd about my family wealth, nor did I flaunt the fact that I was worth millions. Purposely, I wore faded jeans and tops from Target, scuffed shoes and no jewelry.

That’s when I figured out why handsome, debonair, out-of-my-league Todd was attracted to me.

After a slow sip of my cabernet, I widened my eyes with innocence and said, “As a matter of fact, Uncle Hal just told me a secret about his treasure.”

“I knew it!” Todd exclaimed, his fist banging on the white-linened table before he realized he needed to play it cool. “I mean, just now I put two and two together. Your uncle is the mastermind of the mysterious map.”

I nodded, egging him on. “I think it’s a weird way to share some of his money, but according to my dad, Unc Hal has always been an odd duck.”

“So your uncle really did hide a hidden chest filled with gold coins worth . . .”

“Two million dollars, to be exact, mostly gems and some diamonds, though.” My stomach lurched to see the naked greed in Todd’s eyes. “Thousands of people are following his clues to find his treasure chest.”

Todd hung on to my every word: “So he told you a secret about his map?”

“Why do you care?” I asked him, deciding to be direct. “Are you a treasure hunter?”

Todd immediately claimed no interest, but I knew better. 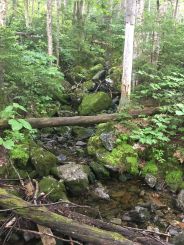 “Just as well,” I assured him. “Unc Hal told me everyone was rushing to Squaw Mountain Trail in Colorado, when in fact, he placed the chest at the foot of a crooked birch on Big Squaw Mountain in Maine.” I giggled. “I wonder how long it will take for anyone to figure that out?”

Sure enough, the next day, Todd was gone. Disappeared.

I texted Uncle Hal. “I think we need to stop this hunt.”

“Why?” he texted back. “Three people are close. They’re in Colorado, and near the trail.”

I led Todd to the wrong mountain.

In the wrong state.

And a week later, Todd was still missing.

My phone bleeped a text and I gasped when I saw Aurora’s message:

Thanks to Google Images.

71 thoughts on “From Dawn to Dusk”