Nina climbed aboard the Acela, holding her overnight bag as well as the floral valise the stranger handed her before he took off in a rush. (At the Station)

She didn’t gasp until she sat down and opened the small case.

Why? Why now? Nina wondered as she stared at the photo inside the bag.

The picture of her and Ben kissing outside the Boston Park Plaza nauseated her. She had been more in love with the idea of Ben than of Ben himself.

This photo was a reminder of her bad judgement and worse choices.

Who took that photo and then placed it in the bag along with the lacy lingerie and hotel key underneath?

The train left the station, chugging along swiftly. Nina peered out the window, viewing the bare branches of oak and beech, tiny buds still tight but sensuous in their emerging pink tips.

Nina made a decision then and there. Her life had to change. Once her presentation at Sterns & Fowler was complete, once she got that promotion she’d worked so hard for, once…

“May I sit here?” an attractive woman asked. She held onto the back of Nina’s aisle seat, gray eyes staring steadily.

Nina looked around at the empty rows in front of her, sighed, and moved to the window seat, placing the flowery bag on her lap again.

“Thank you,” the woman said, sitting primly. “Now, I’ll take that.” The well-dressed lady held out her hand toward Nina’s lap.

Nina closed her mouth, gulped, and handed the bag over. “You’re ….” Nina couldn’t say the name.

The train lurched around a curve, and Nina’s body slid to the right, her shoulders touching the woman’s.

As the two women righted themselves, the bag owner turned and stared at Nina.

“Are you in love with my husband?” Ben’s wife asked her.

Nina inhaled sharply. “I have not been with Ben for over eight months. I want nothing to do with him. Why are you here and why was I given this bag with a photo of Ben and me, with….with lingerie inside?”

Betty nodded serenely. “I asked Ben for a divorce two years ago. He refused. I needed a catalyst to get him out of my life. At first, I thought it would be you.”

“Perfect,” Betty answered. “So my scheme can go on as planned.”

Nina shook her head. “I want nothing to do with Ben. Do you know what he used to call you?”

The striking woman smiled at Nina. “Betty the Beast?”

Ashamed of herself, defeated in her private life, wanting only to be a success now in business, Nina said, “I’m done with Ben the Beast. Just leave me alone.”

The sun glared through the large windows of the train, and Nina squinted. “I have a big presentation later this morning. I can’t deal with this now.”

“I’m Betty Fowler. I never changed my name when Ben and I married.”

Time stood still. Nina felt the air pull out of her lungs as if a bomb had just exploded.

Betty continued with a smirk. “Yes, my father is Daniel Fowler, of Stearns & Fowler. Dad hates my husband, and he’ll do just about anything to get Ben out of our lives.”

“And the stranger who handed me your bag?” Nina whispered, surmising the answer.

“My brother. He’s the mastermind of our plan.”

Nina paused, took in a huge breath, and released it with the words that would haunt her for the rest of her life,

“I’ll do whatever you want.”

AND THE WINNER IS… 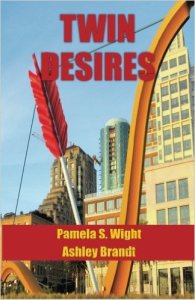 Bernadette won a copy of my romantic suspense Twin Desires, available as paperback or e-book on Amazon.

Bernadette of Haddon Musings, who included a negligee and a key in her conjecture.

Many thanks to all of you who played along with my contest. The varied, unique, and thoughtful guesses (via my blog, my Facebook Roughwighting page, and e-mails) are proof of the incredible creative writers in our world.

“Yellow is capable of charming God.” Vincent Van Gogh #bostonspring #willowtree #daffodils #onmywalk #bostonbeauty #yellow
“Some people will tell you there is a great deal of poetry and fine sentiment in a chest of tea.” Ralph Waldo Emerson #morningritual #teatime #morninglibations #tazotea #apricotvanillacrème #howistartmyday
What the devil? My seasonal specialty. Happy Easter happy spring happy renewal to all. 🐣 #deviledeggs #eastereggs #foodiesofinstagram #eggcellent
Tried to water my poor pansies but notice the icicles where the water tried to drip. That is April in New England! #aprilinnewengland #pansies #icycles #springfreeze
Working hard on publisher’s proof-my flash memoir, FLASHES OF LIFE. June pub date. 💙 #borgopublishing #flashmemoir #memoir #workingfromhome #writersofinstagram #lovetowrite
Is it weird that I made French toast with Rye bread? I may have discovered a new thing because it was delicious! #breakfastideas #frenchtoast #whatsforbreakfast #morningcook #vermontsyrup