As he drones on and on about the meteorological reasons the clouds are forming heavy and dark above our heads, I smile secretly.

In high school, the nerdy boys – the ones who wore thick glasses and crewcuts and got all A’s in science, math, and astronomy – congregated around me.

I got A’s in English, Drama, and Latin. I didn’t want to hear about their rocket science and fog dissections. But Robert, Nerd #1, took me to the Sophomore Snow Ball; Jonathan, Nerd #2, took me to the Junior Prom. I never lived down either event.

Finally, though, the jocks began to chase me, and my popularity rose.

“It looks like temperatures will throttle up, then the humidity will build later on. Not sure when the front will occur, but when that large mass of cold air meets the . . .” My guy’s words soothe me into a non-hearing state as I meditate on the many colors of green in the trees ahead of us – emerald, celadon, chartreuse, jade. I ruminate on the fact that my guy is a weather nerd, and I’m a word nerd. I laugh at him when he brags about his A in grad school physics; he scoffs when I claim my A in grad school Shakespeare is more impressive.

I steered clear of nerds in my college years, not realizing what (and who) I was missing. Back then, I didn’t have a clue that the word nerd was invented by the genius children’s writer Dr. Seuss in the 1950’s. In his book If I Ran the Zoo, a nerd is one of the imaginary animals the narrator wants to collect for his zoo. 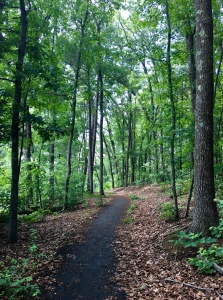 As we walk on the wooded path in complete harmony, I pat my guy’s rear gently as he continues, “It’s the atmospheric pressure of . . .”

Thankfully, I figured it out years after college. This world is a zoo, and there’s no one better to live in it, survive in it, even relish this globe-shaped zoo, than with a nerd.

Nerds are the coolest dudes to love.

Happy 34-year anniversary of nerd bliss to my guy.