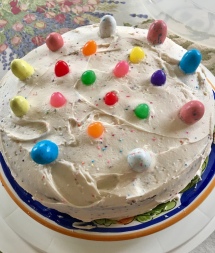 On holidays, my far-away family makes sure we talk to each other on the phone sometime during the day: my brother calls from Maryland as his wife scurries in the kitchen, my guy’s siblings call at usually a most inconvenient time, like when we’ve just sat down for dessert. But still, we stop, we exclaim Happy Fill in the Blank (Thanksgiving, Christmas, New Year, Easter) and we fill up with love.

Which brings me to the phone conversation with my son toward the end of Easter.

Because of the three-hour difference, the day was nearer the end for me than for Sean. My guy and I had just arrived home from a full day up in New Hampshire with sister-in-law and family, daughter and family, nephew and wife. We were stuffed and relaxed and satisfied with a holiday gone well.

When Sean called, he was outside playing with his three boys after a morning that began with skiing in the Sierras and then a delightful sit-down dinner.

“How’s your Easter?” I asked as soon as he called.

After telling me all about their day’s events he ended by saying “I was in a good mood all day.” He sounded so pleased with himself.

Immediately I responded, “Aren’t you in a good mood every day?”

The slightest hesitation in his reply made me realize he wasn’t sure if I was asking a serious question, or teasing him.

“Yes!” I answered with a cheery lilt to my voice.

Sean volleyed back with a chuckle and a “Well, good for you.”

The chuckle was either because he thought it crazy that anyone could think they were in a good mood every day, or because he knew I’d just told a white lie and he would go along with it, or most likely because of the ridiculousness of the fib.

No one could possibly be in a good mood every day.

Of course, all the reasons for his intelligent, articulate chuckle are correct. I’m not in a good mood every day.

But more than anything, a mother wants her children, whether 2 years old, 12, or 32, to be happy. So happy that they’re always in a good mood.

So I lied, hoping my son would think it’s normal to be in a good mood every day. Maybe, sometime when he’s grumpy and harried and having a really bad day, he’ll think of his mom, smile, and suddenly be in a great mood.

ARE YOU IN A GOOD MOOD TODAY?