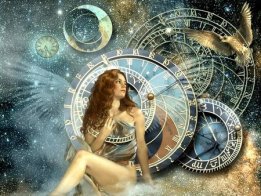 As we begin to be inundated with “the holidays,” I shiver at the thought of how fast the time has gone.

If someone came up to me and said, “Fooled ya, it’s really May 25,” I’d gladly and willingly believe them.

In fact, just this past month I told two different people that it’s spring. And I was being sincere! Embarrassing? Yes, but my brain really can’t fathom the fact that we’re into late fall already.

Where does each day go? The goddess in charge of the calendar just swoops days up into her apron, juggles them around as if they’re playing cards to be shuffled, and then (the clinker here) snaps her fingers like a magician to make them disappear.

The weird thing is how this same goddess, when she and I were much younger, tricked the days into being as long as a string that encircles the earth. I remember a day in my 6-year-old life, for instance, when my mom and I were visiting her sick friend.  The morning crept by tick tock tick tock tick tock one minute at a time, slow slow until hours and hours later, it was still morning and I still had to play with the friend’s smarmy kid.

Once in high school, the days were still excruciatingly long: each year – freshman, sophomore – took a decade to complete. The idea of ever being an adult, on my own, away from my parents’ grip, was too ludicrous to even contemplate.

But now, spring has become fall in the blink of an eye.

If time keeps racing on, laughing at me, daring me to slow it down, I will be an old lady in two blinks, feeble, stooped, alone, and lonely.

That horrible reflection turns my thoughts to Elizabeth Haileys’ quote from A Woman of Independent Means, “Time is a cruel thief to rob us of our former selves. We lose as much to life as we do to death.”

Then I berate myself for cogitating so negatively. After all, without time, we’d all be without family, loved ones, friends; in fact, we’d be unshaped and unbeautiful.

And each of us are so lovely in our own time, shaped from our own experiences, bent and doubled over sometimes, yes, but still standing strongly, still looking that time goddess in the eye and saying, “Bring it ON.”

Pauline Fisk explains it superbly in her book The Secret of Sabrina Fludde:  “The flow of time is always cruel. Its speed seems different for each person, but no one can change it. A thing that doesn’t change with time is a memory of younger days. Something that grows over time is a true friendship, a feeling in the heart that becomes even stronger over time. The passion of friendship will soon blossom into a righteous power and through it, you will know which way to go. Time passes, people move… like a rivers’ flow, it never ends. A childish mind will turn to noble ambition, young love will become deep affection, the clear waters’ surface reflects growth. Now listen and reflect upon yourself.”

So I am listening, and I am reflecting, celebrating my righteous power and deep affection for life.

And trying not to look at the clock while doing so….