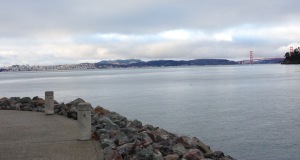 I’m walking the same paths that I did when Henry sniffed along with me. Days after he died, when I began walking alone, I realized how much of a fixture we had become those early morning walks. Half a dozen other early ramblers inquired, “where’s Henry?” or “where’s that bright-eyed, busy-tailed dog of yours?”

Now it’s almost five months later, and I still walk our same route. This morning, one of Henry’s biggest fans stops me on the path, the San Francisco Bay by our side, a tiny otter face peeking out in the foggy mist.

“So, are you getting a new dog?” the woman asks. I don’t know her name, but she knows my dog’s name. Every time she speed-walked past us in

days past, she nodded knowingly at Henry’s hippy limp, his dragged leg, and said to him, “I’m right there with you kid. You’re my inspiration.”

“No,” I answer now. “I’m still missing him too much.” I pause, wondering if I should go on, but the lady’s eyes have not left mine. “I still feel him around me, even see him in the dark of night,” I confess.

The older woman nods her head. “My husband has been gone for five years,” she says. “I still talk to him, and he still answers.”

I swallow hard. “Well, I still talk to Henry, and believe it or not, I still feel his thoughts. Crazy, huh?”

The woman places her soft delicate hand on my arm. “No, it’s not crazy. A dog’s spirit is as much alive as a human’s.”

“Well,” I reply, ready to resume my walk. “That’s why I’m not ready to get another dog.”

She chuckles and begins to walk the opposite direction, calling out as she does, “I know. That’s why I never got another husband.”

Henry smiles along with me as we finish our last mile.

“Sitting on your front porch is like sitting at the boundary of heaven and earth.” John Sarris #onmyfrontporch #memorialdayweekend #reading #simplicity #mollyfindsherpurr #illustratedchildrensbook
Reading to Grandma, Covid-style.🤓#reading #childrensbooks #grandmothersarethebestlisteners #dontletyourmomcutyourhair #covidhaircut #zoom #zoomreading
“We shall find peace. We shall hear angels, we shall see the sky sparkling with diamonds.” Anton Chekhov #heavenonearth #skyward #pinkangels #onmywalk #perspective #eternity #dogwood #bliss
“If there are no dogs in Heaven, then when I die I want to go where they went.” Will Rogers #puppylove #dogsofinstagram #granddog #puppycomfortisimmeasurable
“The Rainbow comes and goes, and lovely is the Rose . . . The sunshine is a glorious birth, but yet I know where’er I go, that there hath passed away a glory from the earth.” Wordsworth #rainbow #outmyfrontdoor #naturalphenomenon #ingriefcomeslight #heavensgate
“The whole problem with western civilization is that ever since the Greeks we’ve been trying to squeeze the mind into the brain and it won’t fit. The great gift of a leaf is that it relaxes the brain, freeing it to float to its true home in the ...sublime state we call tea mind.” The Republic of Tea #teamind #grieving #vanillaalmondtea #flowershelp #thinkingofyoubouquet #sipandsavor #sunflower