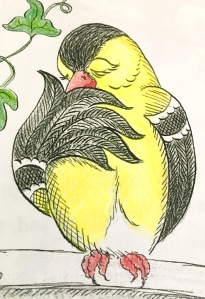 I never would have guessed that the third stage of publishing a kid’s picture book – the stage in which I actually read said book to kids, would produce knocking knees and sweaty palms.

But last week I found myself at my grandson’s elementary school, nearly ending my children’s book career at the front desk.

“Have you been here before?” the school secretary/security guard/frowning matron asked me after I’d buzzed in and the door unlocked so I could sign in.

“Yes! I pick up my grandkids from time to time,” I answered with aplomb.

“Have you filled the CORI form?” The question popped out like the sound of a BB gun.

“The Adult Personal Criminal Record Request Form,” the lady responded, truly not interested in the fact that I was shaking in my shoes, now afraid that I wouldn’t have a chance to fulfill my grandson’s dream – to have his grandmother share her story with his classmates. “All volunteers must fill it,” she added.

another town where I teach (“Legally, doesn’t count – we need one for each school district,” she explained a bit more gently) and after I showed her my book.

Released, I walked down the institutional hallway, through one double doorway, then another, turned left, then right, and then – the elementary library.

As I stood at the front of the library’s reading room, I watched a gaggle of 7-year-olds walk into the room, whispers following them: “We have a guest!” “Who is she?” Clark had requested that his teacher and the librarian keep my visit a secret until he had a chance to introduce me.

After the kids sat at their place on a marked alphabet rug (“I’m an “O”; “I’m the S”), the librarian requested Clark to stand next to me and announce the special guest.

“My grandmother wrote us a book,” he said proudly but with a little quiver to his voice. “She’s going to read it to us now.” He sank down on the rug, rung out.

“Nice, Clark, but will you please tell your classmates your grandmother’s name?” the librarian said.

Clark popped up and stared at me like a deer in headlights. I could literally see the question mark over his head. He leaned toward me and in a stage whisper asked, “Madre, what’s your name?!”

I stage whispered back, “Madre to you, Ms. Wight to others.” A look of comprehension flooded his face. His grandmother was not just “Madre”!

Finally, I began. Twenty pairs of eyes stared at me and the pictures in the book as I read the story of Bert and Bessie. Their eyes widened when the cat caught Bert’s tail. Their expressions glowed when Bessie stood up for the bullied Bert. My voice grew stronger as I realized these 1st graders loved my story.

Not only did I receive applause at the end of the reading, many students bellowed out “Bravo. Bravo!” as I read the last page, “The End Is Actually Just the Beginning.” 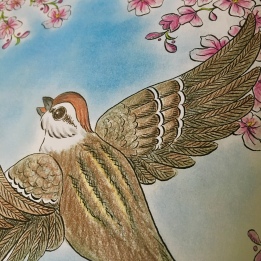 But the true success of the day? Clark’s chest puffed in pride.

His grandmother was an author.

And his friends thought that made him special.

Me? I walked through the double doors and back out into the spring weather with feet as light as feathers and with shoulders that sprouted wings. 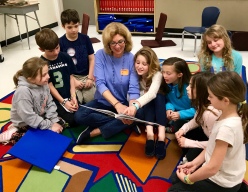 And then, I did it all again the next day for my granddaughter’s 3rd grade class.

Those students spent 10 minutes after the story discussing the meaning of “the end is  actually just the beginning.” One boy shouted out definitively: “It means SEQUEL!”

My wings grew another inch.