My name is Pamela, and I am a middle-aged woman.

I never told my family this, but once, long ago and yet still now (on the time spectrum that surrounds us, even though most refuse to see it), I am the princess of an enchanted island.

You may say that I speak falsely, since I stated that I’m not always a woman. A princess is female, true, but in our other world, the one of Endoplactum, we are not woman or man, girl or boy. We are princess or prince, knight or maiden, creature or daemon.

I am a princess.

And I am not middle-aged on this island, but neither am I young. On Endoplactum, we are not young or old, middle-aged or “don’t-even-think-of-asking-my-age.” 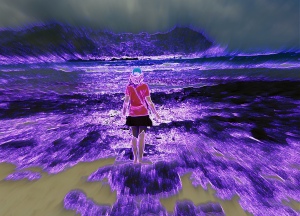 As an Endoplactum princess, I watch my other self, the Pamela on the mid-Earth spectrum, go through her short time span from birthday to birthday.

I feel sorry for her and all those who call themselves “middle-aged” in that sphere. So, I visit her – me – as often as possible. I show up in different forms, which is beyond fun. I’ve been a shadow on her bedroom wall (which wasn’t the best form, since one night she woke up, saw me – the shadow – dancing, and screamed bloody murder).

More often, I’m the soft whisper in her ear, the sweet puppy who stops by for a pet, or even the beautiful lime-green creature of the forest. (Again, though, she screamed, calling me a “worm” and flinging me aside.)

So, I planned a more joyous visit, in which I subliminally emboldened her to search for her true self in this week’s galvanizing blizzard.

Together, we called to the angels of the snow and the wind, laughing with Mother Nature, realizing there is no beginning age, or middle or end. For one short moment . . .

. . . Princess of Earth and Endoplactum were united.

123 thoughts on “The Princess of Endoplactum”