“I can’t quite believe this,” the specialist exclaims.

These are words I like to hear from my agent when she’s scanning my just-written manuscript.

But they are not words a doctor should express to a new patient after he has taken a biopsy of a gland that popped out of nowhere on an until-now rather nondescript index finger.

“What, exactly, can’t you believe?” I ask the doctor, whose mouth is open while he reads the report on the computer screen in front of him.

I met this dermatologic specialist – 50ish, graying hair, kind blue eyes – a week ago at the advice of my GP. My pointing finger, as some call it, had become suddenly swollen over the past 15 days, from hardly noticeable to extremely painful as the size of the digit increased.

At first my GP thought I’d been bitten by a spider or bee, but tests discovered no poison and no reason for the swelling. An x-ray revealed a gland filled with … some purple substance.

The purple didn’t bother me as much as the fact that my GP explained: “we humans don’t have glands in our fingers.”

Thus, I was sent to this dermatologist, who stuck a long sharp needle in the troublesome digit. And here I am, three days later, waiting to hear the results.

Dr. Nomad pushes his chair back from his desk and suggests, “I need you to stay calm.”

I stand up, sit down again, and then stand. “What? What is wrong with my finger?”

The doctor gives me a disappointed glare, “I just told you to stay calm. We can figure this out.”

“Figure what out?” At his insistence, I sit down again, but not until he’s closed his office door.

“It’s not a gland, exactly, that is causing the swelling. It’s more like…” he pauses, then continues, “Have you experienced any other swelling with fingers, or in your hand?” 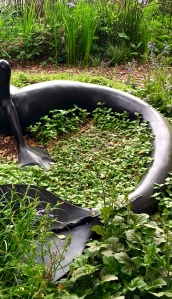 I explain to the dermatologist that I’ve been ignoring what’s happened in the past three days, in which my middle finger is also swelling, and some skin is growing between the two fingers.

“Yes, just what I thought,” he nods, trying to hide the fascination in his face.

“What?!” At this point I’m ready to behead the man.

“The biopsy of the purple substance indicates that these are the same cells found in lizards.

My tongue snaps out. As quick as a flash. “I did not hear you correctly,” I announce, while at the same time my eyes, narrowing, sharpening my sight, detect more webbing on my fingers. My torso feels elongated. I touch my scalp; yes, it’s somehow feeling more pointed.

The transformation occurs so quickly that I can’t even remember how I slither out the door and find myself at my new abode.

Soon after I encountered this Water Woman in Austin TX, I found the prompt “write about a biopsy.” As I wrote, she told me her story.

158 thoughts on “The Transformation”