I pull on my Keen’s and yell to my guy, “I’m off to the post office and CVS.” The day is as glorious as a soft silhouette, so no car-choring for me. I’ll walk instead.

But as I stroll on the side road near our home that leads to a busier, 2-lane street, something glints in the middle of the narrow road. Bright, shiny sharp light found only from shards of glass.

No cars or people are near, so on a suspicion I walk some more, and sure enough, a broken brown bottle is strewn like dirty brown jewels all over the road. Nearby I see several flattened beer labels.

I grab my phone from my pocket and call my one-and-only. “I think you should call the police or public works,” I suggest. As I explain the problem, a car zooms by, traveling over the speed limit, ignoring my hands splayed out in the STOP position. The car’s tires crunch menacingly over the glass.

As I stand in the middle of the road hoping to deter any more unsuspecting cars, I ignore my guy and call the police, quickly reporting the broken glass and worries of damaged tires. As the dispatcher replies, “I’ll write up a report,” I watch my 6 foot tall lean man stride down the street wearing his red, 30-year-old short-shorts and well-used t-shirt while holding a mean-looking weapon – a long-handled heavy broom.

He begins to sweep in bold brave strokes from one side of the street to the other, attempting to remove the glass from the blacktop.

Then a car approaches. Cautiously. It stops right beside my man. Oh! A cop. The officer unfolds himself out of his official SUV like a giant uncurling himself out of a too-small bottle. He keeps stretching out, torso as big as an elephant’s, legs larger than an aged oak tree trunk.

“Thank you so much for coming!” I gush. He blushes, not easy to discern in his dark skin, but I spy the radishes on his cheeks. He offers to take over the sweeping, but my guy holds firm to his broom, so Officer Giant controls the traffic.

Sweep Swoosh Sweep Swish. For 20 minutes my red-shorted man cleans up glass as methodically as a lab technician in a germ-free environment. I whisper to Giant Cop, “He’s an engineer. This could take a while.”

Finally, street safe, the sweeper and the uniformed giant shake hands, each one appraising the other and showing approval in their tight grips and satisfied smiles. 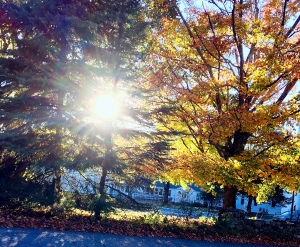 Broken glass no more, and the day shines again as bright as those smiles.