She experienced a strange sensation – one of light-headedness and a touch of nausea while at the same time feeling euphoric and frightened.

The combined emotions were oddly fascinating, and Sheila wondered vaguely if this is what it felt like to be tripping on a drug like LSD.  But she looked around and acknowledged that she hadn’t moved since she stood in the center of the blackened room. She’d taken no pills or drinks. No mysterious fog or vapor filled the small quiet room. Yet, she felt out-of-sorts.

“Hello?” Sheila repeated a third time. She began to wonder why she had accepted the invitation from the new neighbor for a post-Halloween party.  She’d only seen him twice since he moved in a month ago. The scuttlebutt was that he was a world-renowned Russian scientist who had recently joined the MIT staff.  She accepted his written invitation, hoping to learn more about this enticing neighbor.

At 34 and single, Sheila liked to leave no stone unturned in meeting new people.

When Sheila had rung the doorbell, twice, and no one answered, she bravely walked in and followed the bold black arrow that led to a long hallway and then a small room covered by tall black curtains.  She thought it odd that no host was in sight.  In fact, this strange party without any guests was getting old quickly.

Speaking of old, Sheila suddenly felt extremely tired as she moved back toward the door.  Her knees ached and her joints throbbed. She coughed hoarsely, covering her mouth with her palm, holding back a scream as she moved her hand slowly back to its normal position by her side.

Sheila looked frantically around her, and still no one was in the room.  She brought her hand, the hand, up to her face again and gasped.  This was not a smooth, active hand of a 34-year-old.

It was the hand of an older woman, a much older woman, with wrinkles, veins covered tightly by dry coarse skin, and arthritic knobs at the knuckles.  However, the ring finger was still enclosed with the small diamond 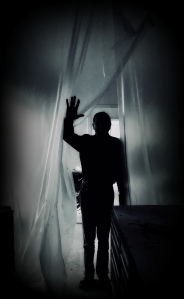 her father had given her on her 21st birthday.

As her head raced and her mouth became as dry as beach sand, Sheila heard the soft polite clearing of someone’s throat.

Sheila turned around quickly, noting the pain in her neck, and stared at her neighbor, Dr. Karl Stapokos.

“What kind of party is this?” she rasped, not allowing him to answer.  “What the hell is going on?  And why does my hand look like this?” She threw her right hand straight up, only inches from the amused dark brown eyes of Dr. Stapokos.

“You have entered a new invention. The one that will get me full tenure and a cover on Newsweek, no doubt.”

“No, you are now 84, young lady.” His laugh echoed in her failing ears.