Until recently, I had no idea how to undertake the fish.

You know, the yogic Fish Pose.

Over the years, I’ve gotten better at Down Dog and the Plank, and strong enough to accomplish shoulder stands and to hold an Up Dog for five minutes.

But my past yoga teachers never taught Fish Pose.

When I moved from California (some say, “the” yoga state) to New England, I discovered a slow gentle yoga class that I was rather disdainful of at first. I was way beyond needing “gentle.” After all, my mornings started with four sun salutations before the sun even rose.

But this wise yoga teacher just smiled as he suggested a lunge and then encouraged us to hold it for three minutes. Easy peasy I thought after one minute. Two minutes later, I wanted to crumble and weep, realizing my frailty and weakness.

But through slow breathing, meditative silences, and long poses, my body became stronger than ever.

Then the yogi introduced Fish Pose for the end of the yogic practice.

Huh? We moved onto our backs in the corpse pose, then rolled our shoulders tight behind our upper back while turning our chins up to the ceiling, top of the scalp on the floor. 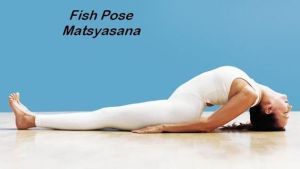 But then came the hard part. The teacher suggested that in this position with our hearts lifted, we send our energy and love and thoughts to someone in need.

I sent out my love to my son, on the other coast, who I knew was having a tough month. Weird, but after a few minutes in Fish Pose, it seemed perfectly reasonable.

We ended the session with an Ommm, and I left the studio feeling like a rubber band.

In a good way.

I sank into the front seat of my car, knowing I needed to return to the world of deadlines and errands, when suddenly my cell phone rang. I wanted to ignore it, still savoring the peace, but peered down at the caller’s name.

He never called this time of day.

“Hello?” I said, heart racing, wondering if there was a problem.

Before stopping myself, I shouted,  “Because of The Fish!”

But then he just laughed without asking me what the heck I was talking about. At this juncture in our mother-son relationship, he seemed to deem it better to not ask.

But we had a great conversation.

Silently, I gave thanks to The Fish.