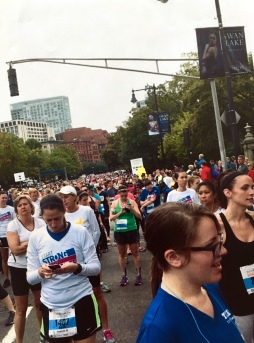 We all heard the piercing ding at the same time.

Which is saying something, since over 20,000 of us – women of all sizes, shapes, colors, ages – were gathered at Boston’s Charles Street to begin the Women for Health 10K run.

Joanne elbowed me as we stood side-by-side waiting for the starting gun to go off. “Do you see what I see?” she asked, staring down at her phone.

I had heard the ding but was trying to avoid my phone, which sat in the back pocket of my black running shorts. Besides, I was mortified by how many people were checking out their cell phones. We humans had become robots for God’s sake: heads-down, uninvolved, funny-looking robots.

“No!” I answered my friend. Like all the other robots, she was checking out her phone.

Just then the gun, which was really a high-pitched one-second siren, went off as the woman announcer shouted from the microphone – “GO!”

Instead, woman after woman lifted their faces up toward the gray cloudy sky. Joanne whispered excitedly in my ear, “The text says ‘Look Out and Look Up.‘”

The announcer tried one more time. “G O …?”  Then,  her voice raised an octave as she shouted through the microphone. “Oh.  My.  God!”

At that point, I looked up also.

Clouds were forming words. Yes, in the bleary drizzly sky, bright rainbow-red clouds gathered together as if by some remarkable, unknown force.

Make? Make what? Everyone stared at each other, then peered up at the sky again.

Make a…? Make a what? I wasn’t the only one with chills crawling up and down my spine.

Women began to cry. Their significant others left the sidelines to join them. Some shouted “YES!” Other women laughed. Some screamed.

Me? I wondered if we dare follow that advice, and who or what dared us to. 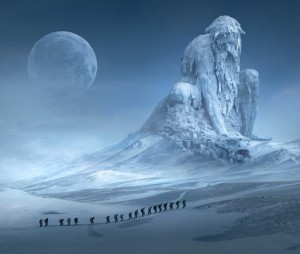 Thanks to D.W. Peach for the push to pursue speculative fiction. https://mythsofthemirror.com/2019/01/16/iceman-januarys-writingprompt/