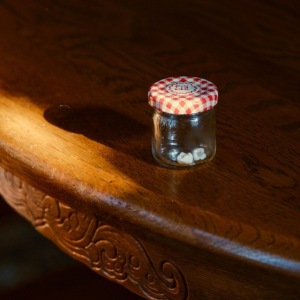 Yes, I still have my dog’s puppy teeth. I’ve never admitted this to anyone until two weeks ago, when our son’s dog, Jax, got hit by a car.

Jax is an 80-pound, 4-year-old silver lab, although more dark gray than silvery. He boasted large paws and a strong body even as an 8-week-old, picked up at a CA breeder’s ranch in the middle of a wildfire. In some ways, Sonny claims, Jax is a “rescue” dog.

Raised with three wild and wonderful young boys, Jax and his playmates tumble and rumble and bark and collapse in happy exhaustion together daily.

The lucky lab runs in their neighborhood hills leash-free, so he’s never walked compliantly on a leash. He’s a competent swimmer, though.

Two weeks ago, my DIL (daughter-in-law) invites Jax to join her for her daily 5-mile walk along a windy narrow sometimes-busy street. An unusual-for-CA rain begins, and although on the sidewalk, DIL holds Jax’s leash tightly in her hands.

Showers turn to serious rain, and the lights grow brighter in the puddles. Suddenly Jax jumps to catch one, pulling his leash out of DIL’s hand as he heads for the bright puddle. Directly in front of a moving car.

Jax is flung up, over the car, and splat down on the street.

The car speeds off.

DIL grabs her phone from her jacket and dials 911, but realizes in seconds that no ambulance will race to take her dog to the ER. No paramedics will bring him back to life.

Sonny, in his home office, makes the 8-minute drive in 3. He parks his car on the side of the road, where cars have stopped, since a woman is praying over her dog.

Sonny opens the door to his car and shouts: “Jax. COME!”

Jax’s body shutters, shakes, and then on wobbly legs, the dog stands up, looking for his man. His best friend. Like a drunkard, he walks slowly toward Sonny, then jumps effortlessly into the car.

DIL picks up two canine teeth, remnants of the accident that remain in the puddle, gleaming like diamonds. Then Sonny and DIL race Jax to their vet, who after x-rays, thorough exams, blood work, and many tongue licks in between, declares: “Jax is a miracle dog. He’s got a dislocated thumb, a few cuts that need stitching, and two missing teeth.”

Jax thanks him with a lick.

I hope Sonny saves those teeth. Twenty years later, when he discovers the jar in the back of his drawer, he’ll remember the miracle of Jax.